Reproduced from https://binarycake.ca/posts/ethereum-taint All rights are respective of their owners - we make no claims.

Deciding to support only static state access (SSA) or to support full dynamic state access (DSA) is one of the remaining open questions on the Eth2 roadmap. If a purely SSA system proves feasible, there are a number of benefits that simplify:

Continuing the exploration of state provider models described earlier, we have roughly prototyped a modification to the solidity compiler that can detect instances of DSA in smart contracts using taint analysis.

This proof of concept shows that it is possible to build tooling to support a purely SSA Ethereum.

DSA is a particularly problematic issue that can lead to an insufficient witness. In concrete terms, DSA occurs when the offset argument to sload or sstore is influenced by a previous sload result.

A short classification of some types of DSA, with solidity examples, can be found here.

Example code in this article is written in pseudocode loosely resembling EVM-flavored Yul, an internal representation language used in the solidity compiler. The prototype is written as an optimization pass that operates on Yul.

Taint analysis (or taint checking) is a type of data flow analysis where “taint” flows from an upstream source into all downstream variables. It is commonly used in web applications, where user supplied values (like headers) are the source of taint, and variables used in database queries are verified to be taint-free.

In a compiled language, it is conceptually similar to symbolic execution, though much less complex.

Consider the following example, where value is tainted by an sload:

The graph below shows the flow of taint from value all the way to twixt. Red nodes and edges indicate taint, and dotted lines represent indirect influence (in this case, through the switch.) 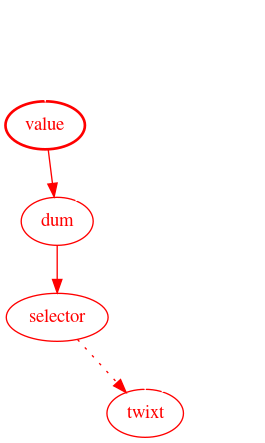 Implementation source code is available for solidity 0.5 and for solidity 0.6, though not all features are implemented on both branches. Test cases can be found here, though not all successfully pass. This prototype is built as a Yul optimization pass, and so requires --optimize-yul --ir as additional compiler flags.

Since this is a proof of concept, the output is messy and barely readable, the implementation is inefficient, and is 100% capable of summoning nasal demons. Obviously, don’t use this software in any kind of production environment.

The analysis can be split into three conceptual phases: data gathering, function resolution, and taint checking.

In the data gathering phase, the analyzer visits each node in the Yul abstract syntax tree (AST). This phase accomplishes several goals:

The following is a simplified example of the information collected for the given input: 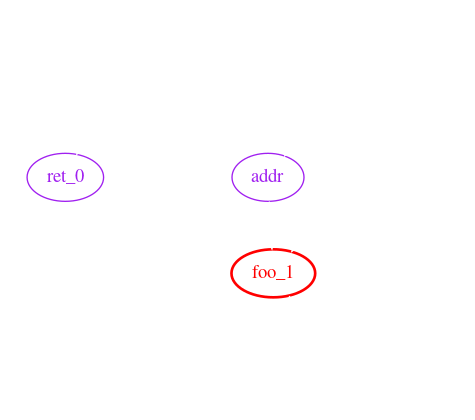 Note that fun_narf_19 is listed as an unresolved function call.

A Note on Memory

Memory accesses are tracked by synthesizing variables (ex. !!m0) for every mstore, similar to how compilers convert to single static assignment form. This process relies on very basic constant folding. Should an mstore or an mload access an offset which is not computable at compile time or has not been written to yet, a catch-all variable !!memory is used instead.

Continuing with the above example, the data flow graph after this phase looks like: 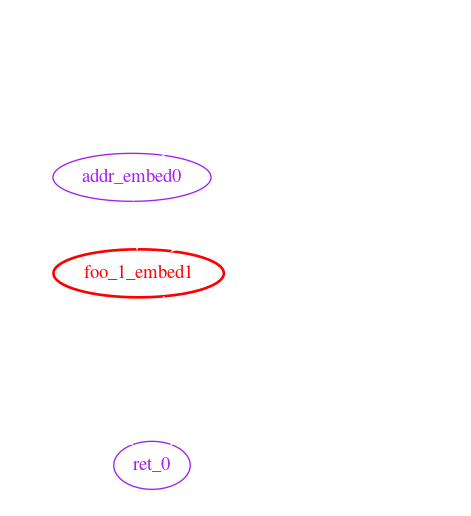 Last, and probably simplest, is taint checking. This phase walks through the data flow graph, tainting every variable that is reachable from an initially tainted variable.

Once the taint is propagated, the “protected” variables (variables used as the key argument to an sload or sstore) are checked for taint. If tainted protected variables are found, a taint violation exception is thrown.

In this example, ret_0 is both protected and tainted. 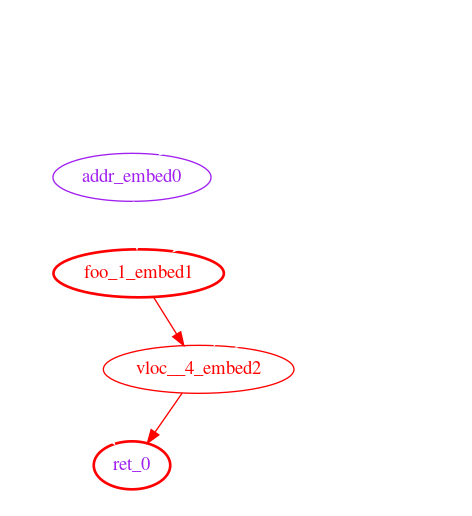 A call graph cycle happens when a function foo calls a function bar and bar also calls foo. For example:

Cycles in the call graph currently cause the prototype to loop infinitely. It should be possible to break these cycles by assuming all parameters of one function influence all of that function’s return variables.

Constant propagation is the process of substituting the values of known constants in expressions at compile time.

This prototype implements a very limited form of constant propagation to support the mstore and mload instructions. If the offset argument to mstore or mload can be computed at compile time, the taint analysis through memory is more accurate (fewer misleading taint violations.)

The builtin functions to call other contracts are disabled in the prototype. Enabling them requires further thought on the ABI between contracts.

The approach taken in this prototype to handle control flow and branching (synthesizing !!block variables) is insufficient to accurately trace taint through loops.

Which roughly translates to the following data flow graph: 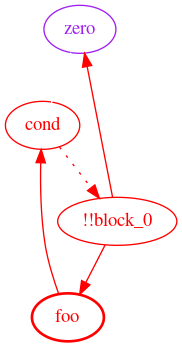 zero is not influenced by !!block_0 between where it is assigned and where it is used for sload. In other words, zero is not dependent on storage[0] at the time sload is called, even though the data flow graph thinks it is.

Variables in the prototype are tracked as an indivisible unit, which may be tainted or clean. Tracking each bit of a variable separately enables more accurate analysis.

This improvement is particularly relevant when using boolean operations (like or & and) and the mload instruction with non-256 bit types.

For example, the following snippet does not exhibit any DSA, though the prototype will report a taint violation:

After execution, the first 33 bytes of memory look like:

Although the limitations mentioned above present challenges for analyzing existing contracts for DSA, we believe that existing compilers can be extended, with reasonable effort, to detect and prevent DSA while maintaining features. Furthermore, given the ease of inadvertently introducing DSA, we believe that adding this feature to smart contract compilers is necessary to write secure code.

One contract, part of @PhABC’s uniswap-solidity, did successfully compile with minimal modification.

A big thanks to Quilt for supporting this research and providing invaluable review and feedback.